Wide-base single tires were touted as fuel- and weight-saving wonders when they first appeared on the market. And while the weight savings remain undisputed, low-rolling-resistance dual tires have narrowed the fuel economy gap.

Some fleets have given up on wide-base tires because of complaints about rapid wear, retreadability challenges, and concerns about traction or the risk of being stranded by blowouts. But many other fleets are sticking with the wide singles and report great tire life, fuel economy, and a generally satisfactory experience.

It’s probably a bit of all three.

“Wide-base singles work better for some people than others,” says Mike Beckett, president of MD Alignment. “I think what separates the two is the ability to tightly control the operation and the tire’s working environment. You have to have the right inflation pressure; you have to use the right axles; and you have to keep the alignment right. Fleets that stay on top of all that are usually successful.”

Beckett believes thin-walled axle tubes and lighter-weight axles are prone to flexing that can cause a tire’s inner shoulder to rapidly wear. He says the phenomenon is present on drive and trailer axles running dual as well as wide-base tires, but it’s more pronounced in single tires, especially those mounted on large-offset wheels.

“Pay attention to your axle specifications. Opt for the thicker axle tubes and eat the 20 extra pounds.”

“When the axle deflects upward, the bottom of the tire scoots out. When it scoots back in, it chops the inside edge off a wide-base tire or the inside edge off the inside tire in a dual assembly,” he says. “Two-inch offset wheels when can exacerbate to the problem by pushing the load center further outboard, adding a greater cantilever effect on the axle tube, causing a temporary negative camber condition as the axle flexes.”

He tells fleets that have problems with inner shoulder wear to stiffen the axles by welding a section of angle iron across the top of the center section of the axle tube, and welding two shorter pieces of angle iron outboard of the suspension.

“Customers tell us it solves the inside shoulder wear problems,” Beckett says. “If you want the benefits of wide-based tires but not the exaggerated inner shoulder wear, you should probably pay attention to your axle specifications. Opt for the thicker axle tubes and eat the 20 extra pounds.”

Beckett’s assertion is disputed by some suspension and axle manufacturers, but he stands by it.

Michelin’s guidance on wide-single tires is similar to Beckett’s. Wide singles are subject to the same operational dynamics as dual tires. Tire pressure, vehicle load and alignment, operational application, and road type all have an impact on how a tire wears and performs, Michelin says.

Tires usually don’t self-destruct. They exhibit wear characteristics imposed by external forces, such as bad alignment or loose or worn suspension components. They respond to the environment.

Beckett says dual tires and wide-base singles respond the same way to various mechanical problems, but the signs of wear are usually amplified because there’s only one tread face rather than two. “They aren’t necessarily more susceptible to wear, they just show the signs more clearly,” he says. “They seem to be less forgiving than dual tires.”

Many tire problems can be traced to mechanical conditions in the vehicle. That makes drive-axle and trailer-axle alignments particularly important, even if they are not commonplace among fleets.

“Alignment refers not only to the various angles of the steer axle geometry, but also to the tracking of all axles on a vehicle, says Remec. “The dual purpose of proper alignment is to minimize tire wear and to maximize predictable vehicle handling and driver control. Along with misalignment, improper inflation pressure and the inappropriate use of a tire/retread design for a particular application can all limit the life of a tire.”

Owner-operator Henry Albert, who aggressively pursues his fuel economy target of more than 10 mpg, swears by his wide-base single tires. Last fall he retired a set of Michelin X One Energy drive tires after more than 610,000 km. He says there were still 3/32nds of tread rubber left, but with winter approaching he wanted a little more rubber down below.

“That’s good tire mileage, and it’s not unusual for wide-singles to run out like that if you look after them,” he says. “I align the truck regularly with the MD Alignment tools and vigorously maintain 100 psi inflation pressure with the help of a tire pressure monitoring system.”

Wide-base single tires appear to be more sensitive to incorrect inflation pressure than dual tires. While fleets routinely “over-inflate” their dual tires to 100 psi, it has been suggested that over-inflating wide singles can distort the tire’s shape, especially when lightly loaded, causing the center of the tread face to contact the road rather than ensuring even contact across the tread face. This, Beckett explains, changes the tire circumference and scrubs the shoulder area.

Similar issues appear on some brands of tires exposed to excess speed, he adds. “The centrifugal forces acting on the center of the tread face cause it to grow taller than the shoulders. The shoulders are attached to the sidewalls so they can’t maintain the same circumference as the center, and you get scrubbing of the shoulders as a result.”

Over inflating also renders the tire more susceptible to damage.

“Over-inflated tires increase the likelihood of crown cuts, impact breaks, punctures, and shock damage resulting from the decrease of sidewall flexing and an increase in firmness of the tread surface,” Remec says. “Maintain all tires at the target inflation pressure based on the manufacturers’ application data book for the particular axle load.”

Michelin’s recommendation for its current X One Energy Line D 445/50R22.5, for example, is 100 psi for a fully loaded drive or trailer axle at 17,000 lb.. Bridgestone’s load and inflation tables also recommend 100 psi for its 445/50R22.5 wide-base tires. Other manufacturers have their own recommendations.

And as for the issue of blowouts leaving trucks stranded and unable to “limp-in” for a repair, Albert stresses that he has never heard of properly inflated tires blowing out unless they hit something on the road.

“Underinflated tires run hot, the rubber compounds break down or the sidewalls flex excessively, and the tires explodes,” he says. “It happens all the time, but its not the tire’s fault that it’s under-inflated. My tire pressure monitoring system is the best investment I have ever made in my tires.”

All that said, fleets that don’t have strict tire management programs in place might do better staying with dual tires. Fleets that take tire maintenance seriously and spec’ their equipment properly will see the weight and fuel savings gains.

Nothing in life comes for free. 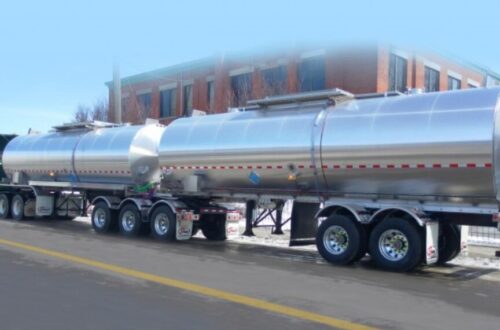 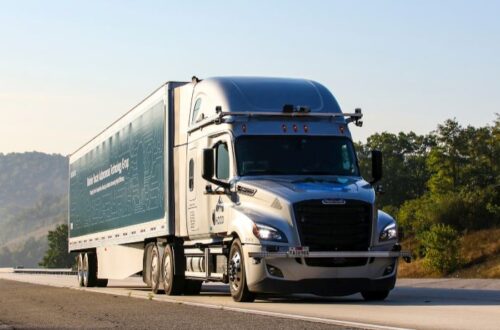 Daimler takes stake in Luminar in push for autonomous trucks