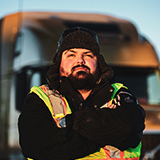 Raposo was driving down 1-80 near Scott, Iowa late one afternoon in February and was looking for a place to stop for the night. “It was snowing really bad and icy,” recalled Raposo.

Due to the poor driving conditions, he had slowed down when he saw a pickup truck trying to pass him in the left lane of the two-lane road which was covered in snow. Raposo continued to slow down.

“When she was beside my drive axle, she started swerving so I slowed down even more. She was able to clear me, but when she passed in front of my truck her rear bumper was just five or maybe six inches from my bumper and then she veered off the road and went in the ditch.” He remembered that the pickup rolled over on its passenger side.

“I pulled over and got out and she was already standing up inside the pickup cab with her feet on the passenger door,” said Raposo. “I told her to climb out the driver’s window and then I told her to jump, but she was scared. She had to jump down about six feet. I told her to jump and I would catch her. She was little, maybe 120 pounds, but I thought, ‘Oh, this is gonna hurt,’ but I caught her and then we both fell into the snow.”

Thankfully, the young woman didn’t have any injuries. “I told her she was very lucky,” said Raposo. He told her she could wait inside his truck to stay warm. He called 911 and first responders arrived within five minutes. The young woman later called Raposo’s employer, Bison Transport, to relay her thanks for his help that night.

This is the second time Raposo is being recognized as a Highway Angel. In August 2020, he saw a man sitting at the edge of an overpass near Amarillo, Texas. Raposo maneuvered his truck to divert oncoming traffic and then got out and talked to the man, empathized with him, and calmed him until police arrived and were able to convince him to move back from the edge of the bridge.

Raposo’s family moved to Montreal, Que. from Sao Miguel, Azores, Portugal when he was young. He learned French at school and taught himself English by listening to the radio at home. Today, he and his wife, Stephanie, have two young children and are expecting their third child in April.

It was a bright, sunny day when Ciorba was southbound on I-57 near Dix, Illinois. As he approached a bend in the road, he checked his mirrors and noticed another C.A.T. Inc. truck traveling about a quarter mile behind him. As Ciorba came around the bend, he saw there was a construction zone up ahead and one lane was closed.

Traffic was quickly backing up and Ciorba had to slow down as a pickup truck was following closely behind him. A moment later, as he checked his right mirror again, he saw the other C.A.T. truck rear-end another tractor trailer. “I’m almost certain he must have been blinded by the sun,” Ciorba told TCA.

As soon as he could stop, Ciorba turned on his 4-way flashers, grabbed his fire extinguisher, and ran back to the accident scene. As he reached the other C.A.T. truck, he saw that the cab had sustained heavy damage. Another motorist told Ciorba he could smell gas.

Ciorba’s training as a truck mechanic kicked in and he worked quickly to cut the battery cables to prevent a spark and disconnected the fuel lines. He then checked on the driver. “The window was broken and the door was crushed,” he said.

The driver’s face was covered in blood and he was having difficulty breathing. He was pinned by the steering wheel. “I told him everything would be fine and to keep calm and breathe. I tried to open the door with a hand bar, but the door was completely compressed,” recalled Ciorba. He kept talking to him to keep him awake, but the driver lost consciousness three or four times.

First responders arrived within 20 minutes, but it took more than an hour to extricate the driver from his truck. In the meantime, Ciorba stayed on scene and called the C.A.T. dispatcher to relay what was happening so the company could inform the family of the driver’s injuries and what hospital he was airlifted to. He then waited to be sure the truck and load was secure until it could be towed.

The driver’s mother later contacted Ciorba to thank him for helping her son. He is now back at work and the two men have met. Ciorba says his family raised him to help others in need. He is from Romania and moved to Quebec nine years ago. He was a truck mechanic before joining C.A.T. Inc. three years ago as a truck driver. He says his training helped him to know to disconnect the power and the fuel which likely prevented the situation from becoming far worse.

For their willingness to assist, TCA presented Raposo and Ciorba with a certificate, patch, lapel pin, and truck decals. Their employers received a certificate acknowledging their driver as a Highway Angel.

Since the program’s inception in August 1997, nearly 1,300 professional truck drivers have been recognized as Highway Angels for the exemplary kindness, courtesy, and courage they have displayed while on the job. 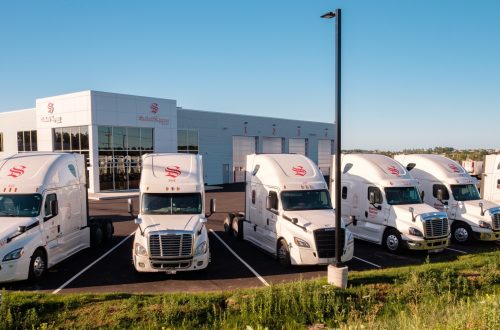 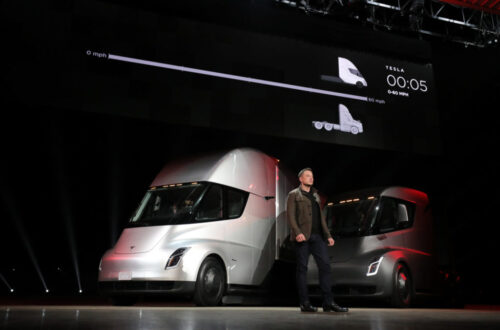 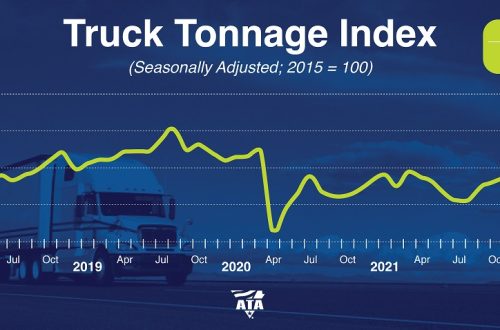