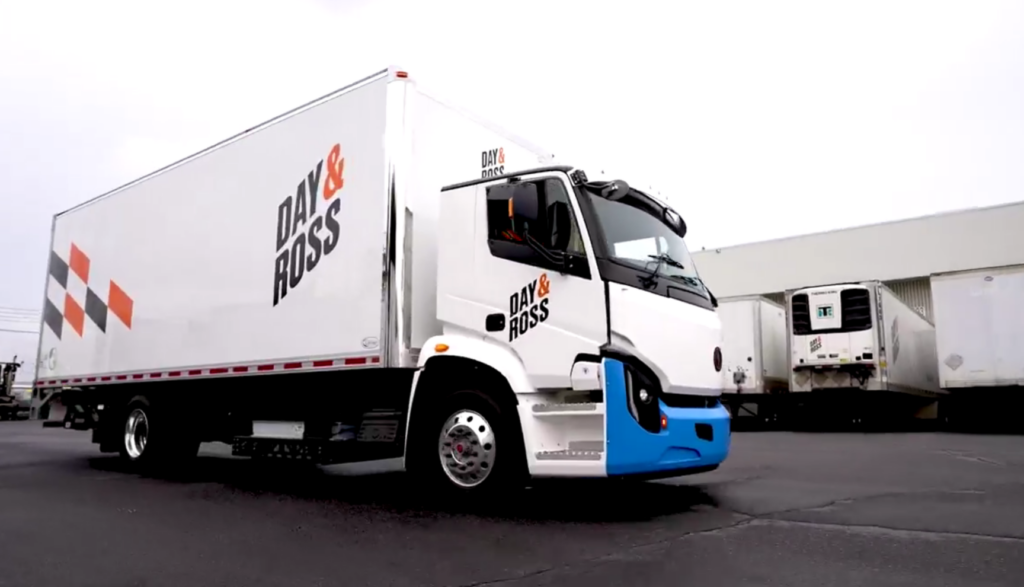 If you want to know the rising importance of sustainable business practices in trucking, look no further than the questions from shippers. Billy Rae Rattray, the environmental coordinator at Day & Ross, knows he has seen a rapid rise in requests for proposals that reference environmental targets.

“One in three incorporate some kind of sustainability ask,” Rattray says, referring to RFPs answered by the fleet. As recently as three years ago, such questions might have emerged once a week.

“Sustainability is more than a nice-to-have,” he adds. “It’s now more of a must-have.”

Trucking is clearly more environmentally friendly than it was in days gone by. Diesel particulate filters capture flakes that would otherwise burrow into lungs. Exhaust gas recirculation systems and diesel exhaust fluid slash smog-producing NOx. The latest generation of trucks generates lower levels of greenhouse gas (GHG) emissions than ever before.

But despite all the technical gains, trucks account for a growing share of Canada’s GHG emissions. In 2000, heavy trucks accounted for 29 metric tonnes of carbon dioxide, according to Natural Resources Canada. By 2018 that had grown to 34.6 metric tonnes. Medium-duty trucks saw levels rise from 10.8 to 21.6 metric tonnes in the same time period.

This is hardly welcome news against a backdrop of commitments to reduce such gases. By 2030 the federal government wants overall GHG emissions to be 40-45% lower than levels seen in 2005. The goal is to see net-zero emissions by 2050.

Pressure to be greener

It means that regulators and consumers alike are adding to the pressure for truck fleets to become greener.

Purolator, 84% owned by Canada Post, cites a recent Leger survey that found 67% of customers would support a business looking to reduce energy and use renewable energy. In other words, the greener practices that slash fuel expenses can also play a role in gaining market share.  Some would-be customers have even said they’re willing to fully switch to the courier as soon as their packages can be shipped using electric vehicles.

The fleet is now testing five such vehicles around Richmond, B.C., and the business will unveil formal GHG targets later this year as part of a new sustainability strategy. A tool to generate detailed emissions reports is also being updated.

“We’re getting more and more requests from our customers to understand their carbon footprint,” says Cindy Bailey, director – corporate sustainability at Purolator.

But measuring sustainability gains also involves looking beyond average miles per gallon or liters per kilometer.

“For the majority of our industry we should be focused on the amount of weight we’re moving from A to B,” explains Day & Ross’ Rattray. “I often share what our emissions per tonne-kilometer is.”

If a report only scratches the surface, a truck with a lightly loaded trailer will seem greener just because it burns less fuel than its counterpart loaded to a maximum gross vehicle weight and hauling more freight. A long combination vehicle (LCV) with two trailers will burn more fuel than a single tractor-trailer, but do much better when compared to the fuel burned by two trucks each pulling a single trailer.

To put it another way, fleets need to be careful not to compare oranges and green apples.

“You’ve got to have skilled people that can take a look at this. You need to have a dedicated team and you need to develop processes,” Rattray says. But with that in place, environmental impact can be tracked and measured as effectively as financial key performance indicators.

Measuring an existing environmental impact is only part of a commitment to sustainability, of course. Steps need to be taken to burn less fuel, whether that involves enhancing diesel-powered equipment, shifting to fuels with a lower carbon intensity, or moving to battery-electric or hydrogen power.

While battery-electric and fuel-cell-electric trucks account for a sliver of equipment available on the road, some of Canada’s largest fleets are actively experimenting with the options, to see where they’ll fit and how they’ll work.

The early results from fleets and OEMs alike have been promising in specific applications. Purolator’s existing electric vehicles have been able to maintain their state of charge and stability, says Chris Henry, director – national fleet. Even a longer run between Richmond and Squamish, B.C., was successful despite the hilly terrain.

But rollouts of Canada’s electric trucks have largely been limited to test runs. Fleets still need to learn more about ranges, how the equipment runs in different temperatures, charging requirements, maintenance needs, and the right balance between battery weight and range, to name a few issues. Earlier business cases are being made with local runs. Longhaul freight is another matter entirely, in part because of the battery weights needed to travel longer distances between charges.

Rattray says electric shunt trucks show some of the biggest opportunities in the near term. “We think it’s a great application. It’s a hundred-percent-controlled environment. It stays right here.” Some early test units have been able to run around the clock and still maintain a 30% state of charge, he adds. “It’s one of the favorite units to run in the yard, which makes sense. They’re quieter. No smell.”

But decisions to adopt battery-electric trucks can still double or triple the upfront capital costs compared to diesel equipment, and terminals will need to be electrified in the absence of megawatt-level public chargers, Rattray admits. “It’s a little difficult to find parking in front of a Starbucks for a 24-foot straight truck.”

While electric vehicles capture many of the headlines, green gains can also be achieved with combustion-powered trucks that dominate the market.

Day & Ross, for example, has introduced full aerodynamic packages such as side skirts on its trailers, low-rolling-resistance tires, and aerodynamic mud flaps. Boat tails proved problematic, but rear fairings with fewer moving parts have reduced unwanted wake. There are anti-idling systems and speed-limiters, too.

The challenge is finding the equipment that will deliver the best possible results for a specific operation. Aside from the differences seen in different applications, there’s the ever-present concern about “greenwashing” – the marketing language that makes a product appear more environmentally friendly than it really is.

“There’s people pitching us all the time some type of device, a new gimmick,” Rattray says. But such tools are only adopted after a deeper dive into available information, and research by third parties such as PIT Group. Even then, the rollouts are gradual until the changes prove their worth.

Canadian Tire’s maintenance and operations teams all play a role in reviewing concepts for their fleet, gathering data from dynamometers and test runs at the Canadian Tire Motorsport Park racetrack alike. While many changes have been adopted, such as downsized diesel engines, others were abandoned. “We’ve got a number of initiatives that we’ve adopted or simply parked,” Fast says. As promising as a CNG pilot project looked, for example, it lacked the national fueling infrastructure needed to make it work. A unit that promised to lower emissions by injecting hydrogen into the combustion process faced performance issues.

It’s why the fleet is taking extra care to support an array of technologies when opening a new maintenance facility at its AJ Billes distribution center in Brampton, Ont. That will be online in 2023.

“We’re working with a consultant to make sure the building is able to handle multiple types of technology and tractors,” Fast says. “The technology changes so rapidly. At one point people thought LNG would be the clear winner.”

Environmental gains can also be realized by making better use of the equipment at hand, and that’s where transportation management systems are key.

Canadian Tire, for example, relies on a route optimizing engine to minimize the distances drivers need to cover, marrying outbound and inbound loads as closely as possible. A new system to be introduced later this year promises to do even better. “There’s a certain component of the work that’s dynamic, and it will be able to pull that in,” Fast says.

“From a continuous improvement perspective, we’re looking to make our routes and our business more efficient,” Henry says of Purolator. One route might be supported with a 14-footer, while then next might be better served by an 18-foot step van when the numbers are crunched.

Simply tracking the data can identify early opportunities and where to focus attention.

“We saw in the first year a 3% reduction in fuel consumption just understanding how our drivers are driving,” Henry says.

Rattray says GPS tracking has led to significant operational changes at Day & Ross as it looks to maximize the weights on each trailer. “Moving more weight per kilometer is the name of the game in our business.”

Sustainable fleet strategies involve more than the trucks as well.

Purolator, for example, is establishing waste reduction targets for everything from oil to tires. “All that will factor into our overall landfill waste reduction target,” Bailey says. On top of electric vehicles, it’s looking at ways to invest more in renewable energy. Last year that involved purchasing renewable energy certificates, financing the generation of greener power to offset overall energy consumption.

Canadian Tire, meanwhile, is hauling more with 60-foot containers being used in B.C., Alberta, Ontario and Nova Scotia. Those can’t fit every retail location, but when they work the trailers offer space for 13% more payload. That’s particularly important for a fleet that tends to cube out before hitting maximum weights.

“You can’t manage what you can’t measure.”

Looking to the future, the retail fleet will also explore a link between technology and aerodynamics. It was the first Ontario fleet to secure a licence to test platooning systems, which promise to safely establish the tight following distances that improve aerodynamics. Those tests come later this year.

The various sustainability targets will even play a role in selecting other truck fleets to work with. Canadian Tire already sets benchmarks using its own experience. “You can’t manage what you can’t measure,” Fast says. Could such goals be a deciding factor in other purchasing decisions? “We haven’t taken a hardline approach to that,” he says, “but I think that’s coming.”

“We want to work with socially responsible companies that uphold the same core principles,” Rattray says of Day & Ross. “We want to know how they’re performing, what they’re doing internally, to reduce their impact.” 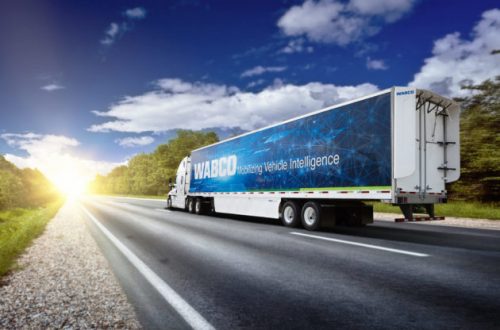 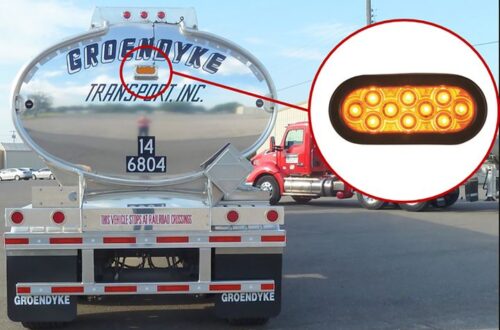 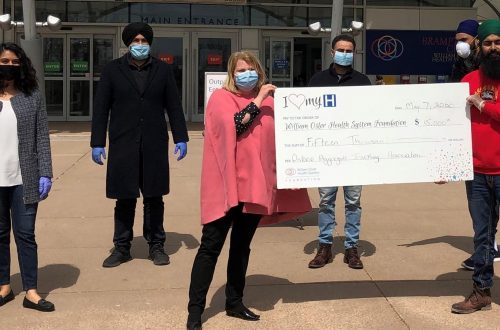